Our kitchen is probably the most important space in our house. For the fridge, the pantry, and the missing Legos I shoved in a drawer. For the haphazard pile of mail on the counter, and the blue hydrangea in the hand painted jar on the windowsill. For the owl-shaped cookie jar filled with British chocolate, and the day’s newspapers and empty cereal boxes shoved into a Trader Joe’s brown paper bag to be recycled – in which I found the check for the fifth grade school trip and also the homework I thought was scratch paper.

And for the large, flat calendar that sits quietly on the counter in the corner. 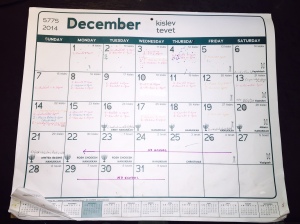 Amid a tissue box, a tin of Sharpies, and a 13-year-old steadily growing bamboo plant, the calendar displays both the secular and Jewish months, national and religious holidays, and most importantly, where and when we all need to to be on a daily basis. My one and only crafty project, at the beginning of the month I sit with a different color pen for each of us and record all upcoming activities, lessons, appointments, parties and trips.

Without the calendar, we all have a pretty concrete sense of what is happening in our lives, but the visual representation of the day, the week, the month, laid out in pretty colors and organized by person brings necessary calm and order to a very noisy, chaotic kitchen. Somehow, if it’s not on the calendar, it’s not happening.

You would think that with my carefully crafted schedule laid out in red, blue, pink, orange and purple, that with this daily, colorful reminder of where, when and who, I would be able to get myself and my people where we need to be with minimal confusion and frenzy, and without frantic yells of, “Come on, we’re going to be late!” Every. Single. Time.

Or maybe you wouldn’t think that. But I would. I do. I think that it is a shame, a sad shame, that a person who used to leave home with plenty of time to drive an unfamiliar route and find a parking spot in a crowded Oakland neighborhood, who prided herself on punctuality and hardly ever kept someone waiting, even when there was traffic, is now always (and I mean always) five minutes late. On a good day.

“I think this is going to be our first fight,” says my dear, non-confrontational friend of 12 years, with undisguised disgust at having to wait for me. Again.

Running five minutes late I text my sister, as I spy the keys I couldn’t find still in the door. And by five minutes I mean at least 11 minutes, but I’m too ashamed to admit I’m only leaving the house now, at the time we agreed to meet.

I call the dentist on the way to my appointment. Tell my son he should walk home because I’m stuck in traffic. I’m late for the vet, the hairdresser, library duty, dinner. And I know it’s only a few minutes, and people are mostly forgiving and understanding (even my friend who is sick of waiting for me; we didn’t fight). I know that in reality the unpredictability of life creates loud disorder and mayhem out of even the most color-coded, organized moments.

But I hate that lately, I am always late. No matter what.

My kids pore over that all-important calendar in the kitchen every day. They delight in the colors, the visual simplicity, the predictable schedule, and mostly in knowing what’s going to happen next: later today, tomorrow, next weekend. One of their favorite days is the first of the month, because they get to rip off the month that was and see the uncluttered potential of the month ahead.

After two long winter weeks away from the scheduled days of the calendar, when we returned home on January 5 they went straight to the kitchen. They ignored the happy barking of Pretzel the dachshund, and clamored around the curling page of December.

“Mom, can we rip it?” Their hopeful faces turned to me. They were four days late already.

The answer left my lips before I even had time to think about it: “No! Just leave it for now. I’m not ready.”

Not ready. Not ready to record the everyday activities into the blank spaces of this month. Not quite ready to jump into January, even though it’s already started. Not ready to let go of 2014, just yet. To leave those moments: those wonderful, difficult, terrifying, incredible, saddest, happiest moments that I will never have again.

I left the kids staring longingly at the stained days of December, in the kitchen crowded with unopened mail and newspapers still reporting 2014, and slowly headed upstairs.

I hate leaving the moment I’m in. Whether it’s a book or the laundry or the conversation I’m having, the quiet of the car, the paragraph I’m writing, the hot shower, or brushing my daughter’s hair into a ponytail. I find it difficult to move smoothly onto the next thing. The next moment. So I linger in this one.

This is a Finish the Sentence Friday post, inspired by the prompt, “You should vote for me for president because…” Hosted by Kristi from Finding Ninee, and guest hosts Michelle from Crumpets and Bollocks and Anna from Fitfunner. You should vote for me for president of the Let’s Be Five Minutes Late Club, because I will never let you down! Even this post is almost five minutes late.