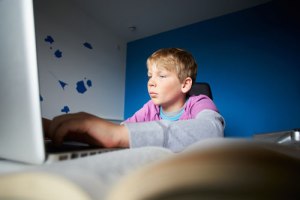 A few weeks ago I heard my oldest boy Skyping with his friend at 11pm on a Saturday night. And he pretended he wasn’t. Told me he was talking in his sleep. Lied to me.

“Almost everything you and your brother do – in secret – I’ve done,” I told him. I did not Skype late at night when I was almost 13 – 1987 was not a Skype-year – but I certainly found ways to test the limits, break the rules, keep secrets. I wanted him to find a way to relate to me, so that he didn’t feel the need to lie his way out of a sticky situation. Then or ever. His online communication opened the lines for real life communication between him and me.

I wrote My Son Has a Secret Life on Skype and it’s on Kveller.com today. Would love to hear if you’ve experienced similar – either with your own teens or as a teenager yourself. Just when I think I’ve figured some of this parenting stuff out…