I texted 17 people yesterday. About five texts per person. Let’s call it 100 texts altogether. I have no frame of reference – is that a lot? Or average textage for a day? I don’t use my thumbs yet. I’ve been texting on an iPhone for just five years, so I still pick out the letters with one hand. I’m pretty fast. But if I used my thumbs I bet I could double my daily output!

Arranged Thursday’s carpool, scheduled a dinner for next week, confirmed the location and time of my meeting today, checked in on three friends, thanked a mom for having my son over, had a real-time “conversation” with another – just another day in the texting-life of me.

You can’t beat this mobile, portable mode of communication for convenience, efficiency and immediacy. It rocks! In the frenetic whirlwind I call my day, it’s the only way to keep all the wheels moving, on the fly, while never missing a beat. And I don’t have to talk to a single person to make any of it happen. (If only the pediatrician and school secretary would allow me to text them, I really would never have to make calls!)

I stay in touch with friends and family all over the world within seconds, send a photo of the book recommended to show I’m reading and love it, did you watch “Downton Abbey”, say thank you for having us over last night, for schlepping my children, for dropping off the surprise orchid just because. With all the gratitude, and intention and sincerity that comes with saying these words in person or on the phone. Because as much as I don’t have the precious minutes to momentarily halt the rhythm of my chaos, and say the words out loud, neither does the recipient of my message. We are human, and we love to be connected, and to feel the love and the thanks and the community – but we are busy, too busy. And this is how we all do it in 2014.

U, ur, lol, brb, abt, omg, ltr… in the US we say xo, and in the rest of the English-speaking world they say xx, and does X mean something different to x, and what if it’s xxx, or xoxo? Did Ryan not text me back about picking up the boys because he’s in a meeting, or because he’s mad at me? Smiley face or emoji? It’s an efficient way to communicate, but also the fastest way to miscommunicate. It’s too quick, too instantaneous. As if instantaneous could get any more immediate! Did u say non-fat or regular latte? Hello? Answer me now ordering, long line behind me. Why aren’t u answering?

A swirling blizzard of short-hand words, coming down faster and faster in a blurring flurry.

When I was 11 I started writing letters to my great-aunt in Delray Beach, Florida. Long, newsy letters on pages of pretty writing paper. For at least ten years, all through high school and into college and beyond. “Dear Auntie Bea…” And she of course replied to every one. On those blue aerogrammes or on pale pink onionskin paper, that weighed nothing so wouldn’t cost too much to mail. “My dearest Nicki…” in her spidery scrawl. 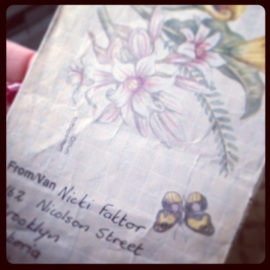 Those letters took a long time to travel between Pretoria, South Africa and Delray Beach. I would reply as soon as I possibly could – once I had read it in the quiet of my bedroom, or at the kitchen table, I would sit down after dinner and homework and write her back. She signed all her letters, “Oceans of love…”

Her words would fall like gentle snowflakes, and once they had settled around me, I could reply. Thoughtfully. Mindfully. Taking breaths between sentences.

I do love communicating in the 21st century – I wrote about it just a couple months ago. Besides the essential texting, and the Instagram which gives me access to a part of my boys’ lives they would never allow me otherwise, Jon Lovitz actually read the blog I wrote about him (or so he says) and then tweeted me (or his publicist did), and how cool is that?!

But there is tension and confusion in the immediacy of our communication today. Too much potential to read between the lines, to take things the wrong way, to respond too quickly. No space to breathe. Or to think. No time to connect to ourselves, never mind to each other.

Across the vast Atlantic Ocean, a decade’s worth of letters slowly traveled back and forth carrying simple truths of stories, hopes, wishes. I am longing for a letter like that again, for the space to breathe, and to feel the snowflakes settle around me. 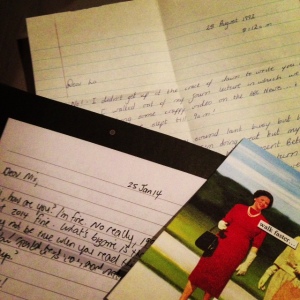 Letters I received after writing this blog 🙂