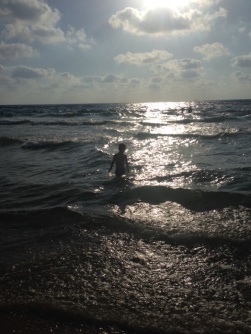 The sun glittered on the reckless Mediterranean. Not quite afternoon, not quite sunset. The golden time in between, when the beach shines almost white and the water is a liquid glow.

Not so gently, the sea knocked them over first from one side then the other, occasionally pausing its playful game so they could catch their breath and float in the warm water. With the sun making its slow descent, they were smiling faceless heads of all ages, talking, laughing, diving right into the crashing waves or holding the little ones up high.

The smoky barbecue drifted toward me as I helped my daughter and her cousin build sandcastles. No English for her and no Hebrew for her, they built a beautiful, sandy city together with nods and smiles, gestures and touches. Up ahead three horses carried their riders toward the dunes. The sun sank lower.

The boys played Frisbee. The girls built their castles. The grown-ups drank beer and sparkling red wine, and the dog lay in the cooling sand, watching and sleeping.

They were photo-perfect moments happening every second, and my cousin ran from group to group and captured each one. “Chayim babu’ah,” she said. Life in a bubble.

Because while we were celebrating birthdays and family and togetherness on my favorite beach in Mikhmoret, sirens were wailing in Herzliya and Holon, rockets from Gaza were hurtling toward Tel Aviv and Jerusalem, and even with scarce cell reception on the beach we all knew.

I saw my aunt’s jaw tighten, almost imperceptibly, as she listened to her chatty granddaughter tell a story. One cousin sat quietly on a chair to the side, minding her own stressful business while she decided whether to cancel the 200-person event she’d planned down south the next day or to go ahead. Another calmly showed me a photo she’d just received of a rocket exploding above her house, a wry smile tugged at her mouth and the worry in her eyes was deep and real. Her feisty little girl toddled toward the sea.

The sun set, and the sky was orange and gray and crimson and the palest, whitest blue.

Life in a bubble.

We sang happy birthday, the kids played checkers and my uncle lit a cigar. I gathered up the half-eaten burgers and empty beer bottles, wiped the hummus with a crumpled napkin, and gave my son his fourth piece of chocolate cake. The music got softer. The sea was dark. “Can we stay till the end of the party, Mom?”

In my bag my cell phone silently rang itself into a frenzy. Dozens of missed calls and texts, emails and Facebook messages. “Are you guys ok?” “Where are you?” From South Africa, the U.S., England. And Israel. Family worried about us. Friends unable to get hold of us.

There’s no wi-fi on the beach in Mikhmoret and I forgot about my cell phone buried in my bag on the bench behind the barbecue.

Life in a bubble.

We didn’t hear the sirens on the beach, we didn’t see the Iron Dome intercept some rockets or hear the boom of the ones that fell. We were celebrating life and watching new friendships transcend language and running after toddlers lured by the playful sea. Because that’s what we planned to do that evening.

“Stay safe,” the messages came back, over and over. How do we do that, I wondered.

“Ma la’asot?” our family on the Kibbutz say, when we visit them and watch the kids swim in the pool. We have schnitzel and salad and delicious ice cream for lunch. What to do? Life goes on.

My aunt calls to check on us. My husband’s family here is worried about us. Because we are visiting. And we’re not used to this. And it’s tense and complicated and scary.

But I’m not scared. We’re supposed to be here.

A bubble with a flimsy, transparent barrier. A bubble that is real and blissful but fleeting and temporary. Anything can happen at any time. And we pray that it won’t. We pray that there will be no more conflict. No more strikes and no more retaliations. No more children killed. We pray for each other, and for our land, and for peace.

And in a fragile, clear bubble, life goes on.