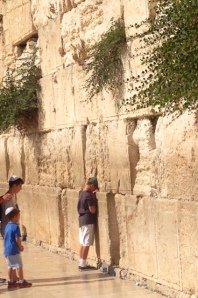 We came to Israel this summer to celebrate.

And for many other reasons too: because our kids had never been and we wanted to show them the land of their people, because we love beach vacations and no matter where you are in Israel you’re seldom further than an hour from an incredible beach, because the food is amazing (never mind the shwarma and falafel, even frozen schnitzel and french fries are delicious here – especially if you eat them on the beach!), because you can kayak down the Jordan river and ride a wobbly camel in the Judaean desert, buy fragrant spices and the freshest challah at the bustling Middle Eastern market in Jerusalem and find the most exquisite shoes at the beautiful mall just steps away, because Israel grabs you by all five of your senses and never lets go…

But mainly we came to celebrate my oldest son’s bar mitzvah. He’s been practicing his Torah portion for almost a year. I’ve heard him once or twice – he doesn’t falter, never hesitates. He has spent hours with our rabbi in Oakland learning, discussing, preparing his speech and his words of Torah.

I imagined it. South African grandparents, and aunts, uncles, cousins from Herzliya, London, Florida, Johannesburg, California, friends from Oakland and Jerusalem and Tel Aviv. I imagined the praying and Mazal Tov! and brunch overlooking the Old City. Shabbat dinner and then a party in Jaffa, while the sun sets into the Mediterranean and we dance and laugh and celebrate.

I imagined us all together, a gigantic family barbecue on the beach, introducing my sister to my future sister-in-law, listening to all the brothers reconnect, meeting my friends at my favorite rooftop bar in Jerusalem. I imagined tears of pride and joy and relief, laughter and singing and so many hugs and kisses on both cheeks.

But I never imagined this.

Of course. I never imagined we would celebrate during a war. I never imagined I would take shelter from an air strike in a restaurant kitchen. Or in my cousin’s house, together with his neighbors and their kids because they don’t have a bomb shelter. I never imagined my kids would know what to do when they heard a siren – but they do, and they don’t falter, never hesitate. I never imagined it was possible to receive so many messages of worry and love from every corner of the earth, every day and through the night. I never imagined I maybe wouldn’t meet my friends to watch the sun sink over the Old City, because who in their right mind would fly into a country during a potential war?

And I never imagined I would almost forget we came to Israel to celebrate my oldest son’s bar mitzvah.

Relentless rockets have been fired into Israel for seven days. Sirens wail from north to south, east to west throughout the day and long into the night. Thank G-d for those sirens, alerting every living creature to take cover, find shelter, usually within 90 seconds but sometimes less. Turn off the car if you’re driving. Move away from it quickly. Find a wall facing north or lie flat on the ground. If there’s no bomb shelter in your building, stand under the stairwell. Listen for the boom, the interception, the all clear.

Finish the surgery on the dog. Continue the soccer game in the backyard. Pay for the sunglasses, and don’t forget the tomatoes. Dinner is almost ready. Life continues.

Who could’ve imagined this? Not I, dreaming my perfect party dreams in my house in California. Not my son, singing his Torah portion over and over with the rabbi at our Oakland synagogue in preparation for his big day at the Kotel. And not our family and friends living their lives in cities and towns all over Israel, planning the summer for their children, taking care of their elderly parents, scheduling appointments and meetings.

I could never have imagined we would be in Israel this summer in the midst of an almost-war. But I cannot imagine being anywhere else. Israel grabbed hold of me and every single one of my senses while I was on a family vacation 30 years ago, and has never let me go. Being here while she is under siege, while so much of the world is turning its back on her and its people, only strengthens that grip. She has never let me go, and I will never let her go.

Life continues, especially during a war. And we are here to celebrate my oldest son’s bar mitzvah. Mazal Tov!

11 thoughts on “What I Never Imagined…”